Posted at 14:33h in Magazines and Newspapers by Jodie 0 Comments
0 Likes

AMERICAN HEALTH
Second Opinion: I Am Not Fat!
by Jodie Gould 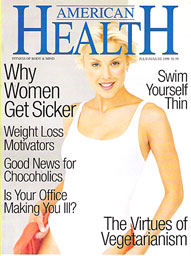 I was on the stationary bike, legs pumping, sweat dripping, eyes glued to the TV, when I heard the news. A study by Brigham and Women’s Hospital and Harvard Medical School in Boston found that healthy women who were 15% thinner than the “average” weights listed on life insurance charts were the least likely to die of heart disease or cancer in middle age. Then the big bomb: A 35-year-old woman (my approximately age) who is 5’5” (my height) should weigh 119 pounds. Chances of early death were 20% higher among those who weighed 150 to 160 pounds.

Suddenly, at 134 pounds, I was 15 pounds overweight. The news stopped my flywheel cold. I tried to think back to when I last weighed 119. I was in my early 20s, fresh out of college and taking four or five karate classes a week. I was in great shape. I even remember doing pushups on my fingertips.

I still work out regularly (although all I push with my fingertips nowadays is a keyboard), but the only chance I have of seeing 119 again is looking though old photo albums. Whatever happened to the chart that placed me in the middle of the acceptable weight range? And whatever happened to the idea that middle-aged spread was a natural as gravity?

I called lead study author and endocrinologist JoAnn Manson and asked her that question. “Just because it’s typical in the U.S. to gain weight as one ages doesn’t mean it’s healthy, desirable or inevitable,” she said. “In Asia, there’s no substantial weight gain with aging. There’s also a lower prevalence of hypertension, diabetes, heart disease and many forms of cancer, all of which have been linked to excess pounds.”

True, you have to go back a long time—perhaps to that first Thanksgiving—to find Americans who were known for healthy eating habits. And it’s an ugly fact that about a third of us are overweight. Still, the idea that living longer means dieting down to a size 4 is bound to cause the already weight obsessed to panic.

“These researchers are talking about inordinately low weights that will be impossible for most people to achieve,” says Dr. John Foreyt, director of the behavioral medicine research center at Baylor College of Medicine in Houston. “Moreover, it’s useless to tell women that it’s better to be skinny without giving them an effective way of getting there. People will just turn to fad dieting again.”

Some experts question the study’s message that weight is more important than diet and lifestyle. “People who eat healthfullly and who exercise regularly tend to achieve their `ideal’ body weight, regardless of the actual number,” says preventive medicine specialist Tim Byers of the University of the Colorado School of Medicine in Denver. “On the other hand, someone who doesn’t exercise and who eats a lot of fat may weigh less but be less healthy.”

But Dr. Manson argues that the real message of her study got lost in the media frenzy. “The point, “she says, “is to prevent obesity, not to strive for extreme thinness. Specifically, you don’t want to gain more than 20 to 25 pounds after age 18, because that does seem to increase your mortality risk. But if a person is already overweight,” she continues, “even a loss of 10 to 15 pounds will have positive health effects.”

So what is the real message here? First, throw away your scale but not your common sense. If you’re able to pinch an inch, you need to increase your physical activity and watch what you eat. Second, it’s never healthy to obsess about being model thin, especially if getting there means smoking cigarettes or developing an eating disorder. Third, if you no longer fit into your high school jeans, throw them away already! I don’t know about you, but I’m much healthier now (physically and emotionally) than when I was a cigarette-smoking, gym-skipping, thrill-seeking teen. I’m happy to be a wiser, if slightly heavier adult.