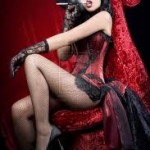 Sue Doe, a statuesque brown-haired beauty, appears on stage sporting curly pigtails, a schoolgirl plaid miniskirt, and a virgin-white sweater that exposes a fetching midriff. To the accompaniment of hypnotic Gregorian chants, she kneels before votive candles, crosses herself, clasps her hands to her breast and sighs in fervent prayer. Suddenly, the music changes to the rock ‘n roll riffs of Frank Zappa’s “Catholic Girls.” Doe then jumps to her feet and begins a classic striptease complete with bubbles, peeks up the skirt, and pouty come-hither glances at the audience. Just when you think you are about to see the standard issue pedophilic fantasy, the show takes an interesting turn. Doe pours hot candle wax down her wrists, back, and nipples.. She stands naked on the stage, arms outstretched like Christ on the cross, as blood-red wax drips from her wounds.

Doe’s performance, called “Rites,” can be seen at the Blue Angel, a small, edgy, Lower East Side club that features a variety of acts, ranging from torch songs to torched thongs. It’s part burlesque, part cabaret, and just seedy enough to make you feel like you’re slumming without being a magnet for low-lives. But what is it that makes the Blue Angel different from your run-of-the-mills strip club? Attitude. It’s at once campy and artistically self-conscious.

Doe continues with her performance, a piece called “Pig Sex,” where she urinates into a cat box and pours it on her head. It’s a stunt that makes the audience either laugh or leave. “We have total control over our shows. We are not censored, even if that means offending the audience,” explains the 29-year-old Doe, who is studying for her B.A. in theater and psychology at Hunter College. The meaning behind “Rites” is about how religion can turn followers into victims. “Pig Sex” is about our animalistic needs.

Although shock theater is nothing new, adult entertainment that attempts to meld brains and booty is. Disney’s Normandy-style invasion of Times Square, generic theme restaurants, and Giuliani’s campaign to cleanse New York of its moral turpitude, is threatening to turn our once unabashedly sinful city into an urban Branson, Missouri. In fact, Laura D., an acerbic, bisexual comedienne who is the Blue Angel’s emcee, invoked the Mayor’s name several times during one Friday night show. She called Giuliani “the Hitler of New York,” and ranted about lesbians from New Jersey, heroin addicts and celebs named David. About David Schwimmer: “What’s the good of being Jewish if you’re stupid? You’re ugly as shit. Either be smart or be funny so we can fuck you.” Even though her jokes sometimes fall as flat as her chest (as she points out), she lovingly introduces each performer and pumps up the crowd when they start to go flaccid.

While there is nudity in many of the Blue Angel acts, don’t expect the silicone beauties you’d find at Scores and other upscale strip clubs. These are real women (and men), with surgically unaltered bodies. There’s Bonnie, the sultry, green-eyed crooner who does a traditional fan dance `a la Gypsy; Andrea, and old-fashioned belly dancer; Riell, a voluptuous, young black woman who does her own Arabian-style striptease, and Velocity, who belts out a punk rock anthem about incest called “Electra.”

A mix of burlesque, comedy, and novelty acts fill in the gaps between strippers. These regulars include a cheesy, prop-heavy magician, the only female sword swallower in the world, and a fire-eater. You might also see a finely tuned husband and wife team called “The Black and the Jew.” (Epstein and Hasans’ act is too blue for the mainstream crowd at Catch A Rising Star, where they were banned. But their pussy, cock, and ethic jokes were no raunchier than other stand-ups.)

The Blue Angel recently moved from Tribeca to the House of Candles, a former Santeria warehouse on 99 Stanton Street. According to owner Ute Hanna, a 44-year-old former actress and stripper from Hamburg, Germany, the club attracts a mixture of Euro, Asian and American men and women looking for some good dirty fun. The Tribeca club was also a favorite of such walk-on-the –wild-side celebrities as Drew Barrymore (who improvised a striptease during one of her visits), Wesley Snipes, Demi Moore, Goldie Hawn, Lou Reed, and Jim Jarmusch.

Hanna, who came to New York 18 years ago to study acting, says New Yorkers are craving a new kind of entertainment. She opened the original Blue Angel in 1993 as a regular strip joint, and later added a few shows on the weekend. “People have seen it all, and they’re tired of seeing it all,” Hanna says. “They’re ready for something that’s more creative and mysterious. How many more tits can you look at?” The Blue Angel soon became known as the only exotic dance club to feature performance art.

“I wanted to change the attitude toward strip clubs and make them a good experience rather than sleazy and exploitative,” Hanna explained. “I wanted to focus on personalities and fantasy.” But when she lost the lease last year, Hanna spent the next nine months looking for another building where she could reopen her club. In addition to reluctant landlords, Hanna faced new zoning laws requiring strip clubs to be at least 500 feet from a school, church, residence or other sex establishments. “I bought a zoning map and looked at every single available building.” she recalls. “There was absolutely nothing left!” Hanna was about to pack her bags and return to Germany but then decided to abandon the idea of opening a strip club to run a cabaret instead. “By making the acts even more creative and theatrical, I could have the best of worlds,” said Hanna. “The zoning laws turned out to be blessing.”