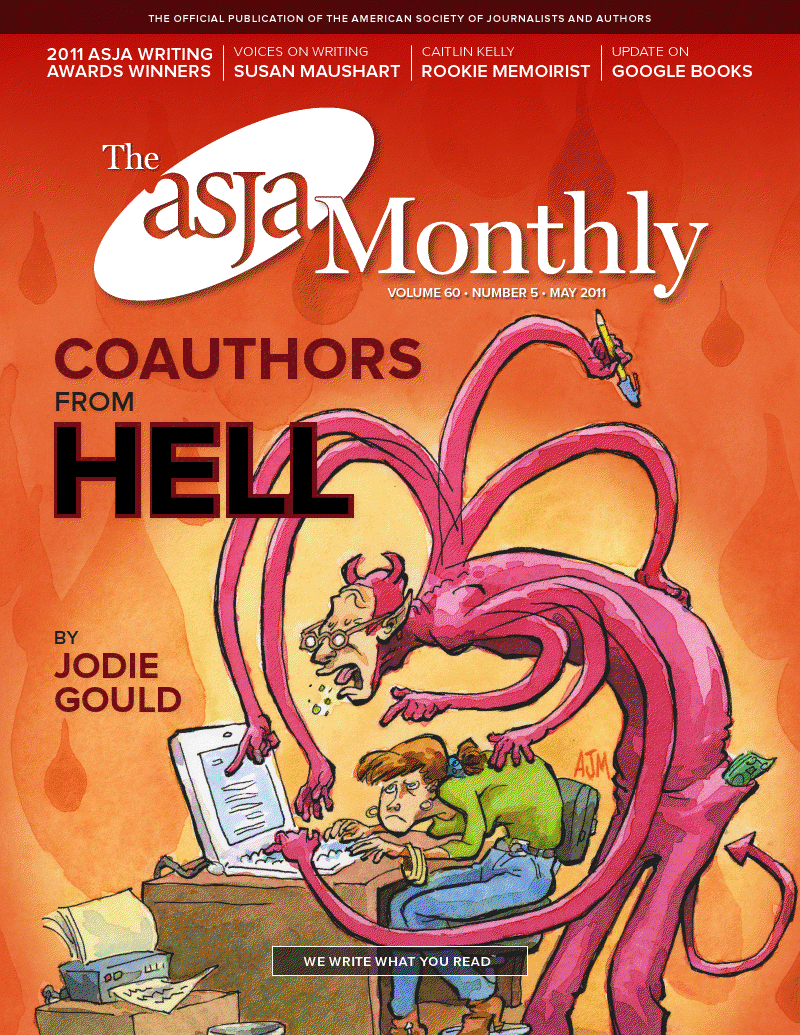 Posted at 21:07h in Magazines and Newspapers by Jodie 0 Comments
0 Likes

American Society of Journalists and Authors (The ASJA Monthly)

For many writers without platforms or a particular area of expertise, collaborations can help keep those book contracts and, if you’re lucky, royalties coming in.  Unlike ghostwriting, having an “and” or “with” before your name is also a way to get credit for doing the heavy word lifting even if your coauthor gets the glory.  And while many writing collaborations are like happily arranged marriages, some end up joined in holy acrimony.

Take, for example, Dayle Deanna Schwartz, author of 12 books, including her latest successful collaboration Effortless Entrepreneur.  Schwartz recalls writing a proposal about a poor, homely black girl who made a fortune photographing celebrities like JFK, Jr.  Unfortunately for Schwartz, the paparazza was also a bipolar alcoholic with anger issues. “When I sent her the finished proposal, she told me I had `gotten inside her head,’ which scared her,” Schwartz says.  She was a bitter person who made racially charged comments that I couldn’t put in the book.  I toned it down, but the editors who saw the proposal said, `I can’t buy this book—she’s too unlikable.’”

Another writer, who wished to remain anonymous, was asked to do a diet book with a licensed nutritionist. Before they began, the dietician announced that she intended to use brand names so she could get sponsors.  “I was concerned that naming brands would date the book, but I agreed,” the writer says.  The expert got paid thousands of dollars from the food and supplement companies that were happy for the publicity, telling the writer that the money was for her kids’ college fund. “Of course, she ended up promoting the products instead of the book,” says the writer, adding, “I have two kids and I don’t have a college fund!”

Sheri Colberg-Ochs also signed on to do a diet book with a reality TV contestant who lost more than 150 pounds on the show. Inexplicably, when it came time to write the book, he was no where to be found.  “I did as many of the chapters as I could on my own, but the book was also about his personal story,” Colberg-Ochs recalls.  “I kept calling and emailing asking for material and I never heard back.  I finally left a message saying that we would have to return the advance. Four months later, he called to say he had gained a lot the weight back.”  The book did eventually reach the stores, she says, but it didn’t sell much because the subject couldn’t show his chunky face on TV to promote it.

In another deal gone sour, Steve Marsh was hired to write a book with two experts whom he describes in an email as “naïve cowboy-types who thought the big boys fromNew Yorkwere ripping them off with the usual author/publisher percentages.”  So they decided to take the advice of someone they met at a New Age seminar and self-publish instead.  “Their fairy godmother promised them million dollar overnight web sales,” Marsh says. “They chopped the book in half to save money on printing, which resulted in wreckage.  The book made it into one store before dying.”

Matt Fitzgerald also had his hopes for a successful collaboration dashed after signing with the elite runner Kara Goucher. Goucher, who had her own agent, negotiated a separate work-for-hire agreement with Fitzgerald.  “When I submitted the manuscript to the editor, he said it was good but 40,000 words too short,” recalls Fitzgerald.  “Apparently, the publisher’s contract with Kara, which I wasn’t allowed to see, was for twice the length. When I told my editor that I had given him what was in my collaboration agreement, he was unyielding.  “It seems Goucher’s agent had requested a shorter manuscript so they could pay me less. I didn’t want to write any more for them unless I got more money, so I left the project.”

In some cases, proposals and manuscripts that take many months to complete are left to languish in collaboration limbo.  This happened to writer and producer Leigh Devine, who found a leading psychiatrist for book idea that she had conceived. It became clear from the beginning, however, that the process would be a difficult one. “His language was stilted and filled with jargon,” Devine recalls, “but he refused to change a word.  He had no clue how to write for consumers.”

Nevertheless, Devine, who cared deeply about the topic, persevered.  “I ended up with a 150-page proposal that took six months to write for very little money.  It was like doing a dissertation.”  The book sold for a nominal advance, but it was slated to be the publisher’s lead title. When it came time to sign the contract the mega-shrink demanded that the contract be renegotiated to meet his terms. “The publisher changed the contract and we were good to go until the marketing department came up with a really great catchy title,” Devine says.  “Of course, the doctor hated it, saying that he could not publish a book with this title. They came up with another even better title, but he hated that one as well.  He never apologized to anyone for his uncompromising, one might say, narcissistic behavior.”  Although the book was pulled, the doctor paid Devine to write more chapters.  “I didn’t care what he did with the book as long as he paid me,” she says.

Perhaps worse than an elusive or recalcitrant coauthor is one who is unappreciative of a professional writer’s ability to transform flat or raw material into silky prose. Medical writer Martha Murphy had one such experience with a doctor of internal medicine.  “He sent me hand-written notes—single-spaced and without paragraph breaks—that didn’t make sense,” Murphy remembers. “I translated it all into English.” Her agent loved the proposal and found 18 interested editors. But to her surprise and disappointment, the project came to a screeching halt when he was asked sign a boilerplate agreement protecting her from liability for the medical advice in the book.

Not wanting to give up on a hot proposal, the agent touched based with the physician a year later to see if he had changed his mind.  “He wrote an email saying, `I’d love to work with Martha—she did a great job typing everything for me,’ Murphy says.  “When I read that I felt like telling him he could pay someone a lot less if all he needed was a typist.  But I swallowed my pride and agreed.  I haven’t heard from him since.”

After one particularly horrific experience, author and TV writer Robin Westen all but gave up on book collaborations. Early in her career, Weston’s former agent contacted her about doing a book with a doctor from a prestigious New York mental hospital.  “I was supposed to write about the day-to-day life at the hospital,” Westen explains, “which I thought would include patients with various psychiatric issues.  It turned out he worked only with the other doctors.  He and they were extremely dull, but I sat there for eight hours every day in a windowless office trying to get compelling material.”  Westen worked hard on the sample chapters, which her agent loved.  She and her coauthor agreed to share the credit and the large advance from a publisher that requested it.

But it all came crashing down after Westen spoke with the doctor’s wife, who claimed to be a writer.  “Unlike my agent, the wife hated it,” says Westen.  “I suspect she wanted her husband working with her instead of me.  No matter what I did she was dissatisfied and we would have screaming fights over the phone while her husband remained silent.  She even threatened to sue me.  I thought my agent would come to my rescue, but she sided with them, which put an end to our relationship.”

Westen vowed never to collaborate again, which she has stuck to until this year.  Still wary, she says she’s willing to give it one more try. “If you’re writing by yourself you only have to deal with your own inadequacy,” she says, “not someone else’s.”  ##

Tips for a Happily-Ever-After Collaborations

The silver lining with collaborations gone bad is that we often make mistakes that we swear never to repeat.  And while there are no guarantees that two or more people will be able to write together in harmony, there are some things that writers can do to protect themselves and their income:

Get it in writing.  In the same way that you wouldn’t write a book without a contract spelling out the advance, deadline, word count, royalty splits, and other fees, you should never do a proposal without a fully-signed collaboration agreement.  These contracts ensure that you get paid for the proposal whether there’s a book deal at the end of the rainbow or not.

The agreement should also include who is responsible for what, including references and studies if needed; expert availability; your byline; and an escape clause that allows either party to walk away should the collaboration fall apart or the advance be too low.  “I ask for 100 percent of the advance and between $5 and $7 thousand for the proposal,” says business writer Nancy Shepherdson.   Have your agent look over the agreement to make sure that your interests are covered.  The best collaborations are ones that have those devilish details ironed out early on.

Decide how to best work with your expert.  It may not be in your contract, but you should decide if the expert is better being interviewed over the phone or sending notes and rough drafts for you to edit and rewrite.  Experts who are used to technical or medical writing often give you better material in a conversational format.

The expert should let you do the writing.  You wouldn’t want an MFA prescribing medication; likewise, an MD doesn’t necessarily know how to doctor your manuscript.  Experts should give you feedback, of course, and correct factual errors.  But ultimately you, your agent and your editor should have final approval of the text, so put that in your agreement.  “My first book I was with a pediatrician who sent the chapters I wrote back with every single contraction changed,” says John Hanc, author of Not Dead Yet with Phil Southerland. “He changed every ‘can’t’ ‘wouldn’t’ and ‘don’t’ to ‘cannot’ ‘would not’ and ‘do not.’ When I asked him why he did this, he said that he was taught that using contractions was bad writing.”

Don’t be Casper the friendly ghostwriter.  Unless your coauthor is self-publishing, writers should work directly with the editors to make sure they are submitting the book the publisher wants.  “I worked with a doctor who didn’t want it known that he wasn’t writing the book,” says Virginia McCullough, coauthor with Greg Risberg, MSW of 52 Bright Ideas To Bring Humor, Hope and Hugs Into Your Life.  “He told me what he wanted instead of what the editor wanted, so the publisher rejected the book.”

Remember the proposal is a dry run for the book.  If your collaborator doesn’t have time to meet with you for the proposal, that person probably won’t be available to write the book.  “We shouldn’t focus only on the money we are going to make,” warns Shepherdson.  “We also need to consider how we are going to spend the next year of our lives.  Go with your gut.  You can always write a book with someone else.”