A Bird’s Eye View of Telluride, Colorado by Jodie Gould 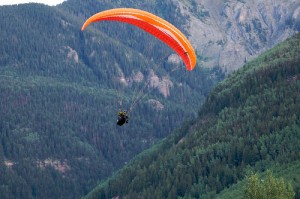 When planning a trip to the magnificent white-capped mountains of Colorado, you probably think about skiing, snowboarding or maybe mountain biking. While these sports are exciting enough, they pale by comparison to being carried off the edge of a cliff by a billowing parachute.

As terrifying as this sounds, paragliding is a relatively new sport that is gaining in popularity. It is gentler than skydiving (there is no free fall), and it lasts a lot longer than a joint-pulling bungee jump. Since I had grown out of my desire to dive out of an airplane, my husband and I decided paragliding would to provide the thrill without the spill.

We signed up with Paraglide Telluride, operated by 38-year-old Scott MacLowry, who’s been flying since 1995. He and Carl Snitselaar, 27, take passengers on tandem flights that can last anywhere from 30 minutes to an hour (one pilot told me he has spent eight hours in the air).

“The biggest misconception about paragliding is that it’s jumping,” explained Scott, who flies year-round, weather permitting. “It takes judgment, intelligence and finesse. Telluride is one of the most extreme places to fly.”

About eight of us (two women, including myself) rode in Scott’s SUV to the top of Gold Hill, a ride that took a full, curve-hugging hour. On the way, we discussed a mishap that occurred several days before, where a fellow paraglider was unable to lift off, and forced to deploy his reserve parachute. The wayward pilot landed on tiny rock ledge, 11,200-feet above ground, where he spent one frigid night before being rescued by a helicopter.

“That guy was a pinhead,” scoffed Jeff Cristol, a paraglider pilot who witnessed the aborted flight “He went out on a glider that was too big for him. We warned him not to go, but he wouldn’t listen.”

If that story wasn’t enough to get our pulse-pumping, all tandem passengers were asked to sign eight pages of indemnifying documents. Hands shook as they copied the statement: “I understand that this may cause serious injury, paralysis or death.”

Afterwards, flyers donned helmets, jumpsuits and harnesses. The pilot, who is strapped behind you with a 20-pound reserve pack, lays out the “wing” on a hillside and waits for air currents to inflate the chute over your head like a kite. Then you both break into a run until the wind lifts you off the edge of the mountain and into the sky. The pilot is able to maintain or gain altitude using air currents and thermals. (Paragliders can reach 18,000-feet, the maximum height allowed by law, and the record distance traveled by a paraglider is 209 miles.)

Once you’re airborne, you can sit back into your harness, and relax (hah!), listen to the rush of the wind and your blood-thumping heart, take in the view, or take a few pictures of your smile-frozen face in flight.

A half-hour later you are floating toward Terra Firma landing gently onto a green pasture.

Jodie Gould is a New York-based freelance writer and author.